Komodo dragons, volcanoes and the evolution of humans

The 5 why's of traveling in Indonesia

The captain’s mate shone with a flashlight on his outstretched arm pointing to the left. It was dark and we had just reached the coral reef. The captain was looking for the passage through it. The steering hut was in the middle of the small ferry, with absolute minimal view. As they did not have any navigation equipment apart from a digital compass, the team was reduced to communicating by hand signals. It was less scary than it sounds, because the reef was easy to find. A long line of fishing canoes with bright lights all along the reef was hard to overlook.

Why were we on that boat? We were traveling in Indonesia, from Lombok (near Bali) to the Komodo Islands. To look for the Komodo dragons. I am a biologist, and Komodo dragons are spectacular lizards, up to 3 meter long and weighing 70 kg. Some of the most beautiful coral reef in the world as well, so well worth the trip. For a biologist, that is. 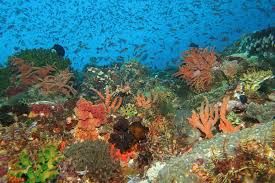 The captain found the gap in the reef and we sailed through, very slowly. Now we were on the ocean side of the reef and the water became, let us call it, choppy. My three travel companions promptly became seasick, basically for the next two days. My partner still dines out on her ‘near boat’ experience, how her conviction that she would die on the trip turned into ‘and please let it be quick’.

So, apart from the real charm of the trip, it was also dangerous – a boat had perished a year before, fortunately without fatalities - and uncomfortable, so why was it recommended in the backpacker guide and why did the service exist at all? The answer is that the ferry by-passes the isle of Sumbawa. And on this isle people adopt a pretty severe form of Islam, making it less fun than the very laid-back Bali or the comfortable Islam of Lombok. And why the more severe Islam in Sumbawa?

That brings us to 1815, the year of the battle of Waterloo. In 1815 the volcano Tambora blew its top and threw 30 to 40 km³ of debris in the air, together with massive amounts of sulphuric gasses. The biggest volcano eruption in historic times. The Tambora is on Sumbawa. The sound of the volcano explosion was heard in Jakarta, 1.200 km away. The impact on Sumbawa was of course devastating, immediate deaths followed by severe food shortage. The island turned to strict religion.

The impact of the Tambora eruption however was felt worldwide. 1816 is the ‘year without a summer’, with snowfall in August in the US and Europe, worldwide failing crops, widespread famine and epidemics such as typhoid fever. In China, famine started in 1815 and the first normal crop was only in 1818. The sky was discolored worldwide, and the strange atmosphere was captured by the painter Turner. Mary Shelly started on Count Dracula while suffering the depressing, bad summer of 1816.

In comparison, the Pinatubo eruption in 1996 expelled 10 km³ of debris and caused a worldwide drop in average temperature of ‘only’ 0,5 °C.

Why were we travelling in Indonesia? It was for me the third lap in a journey, which had started in Sumatra and the next year continued through Java and Bali. One of the highlights of our first trip was a ferry ride (again) and particularly the stay at lake Toba, a volcanic lake in the middle of Sumatra. A very peaceful lake, excellent swimming and relaxed stay overall. 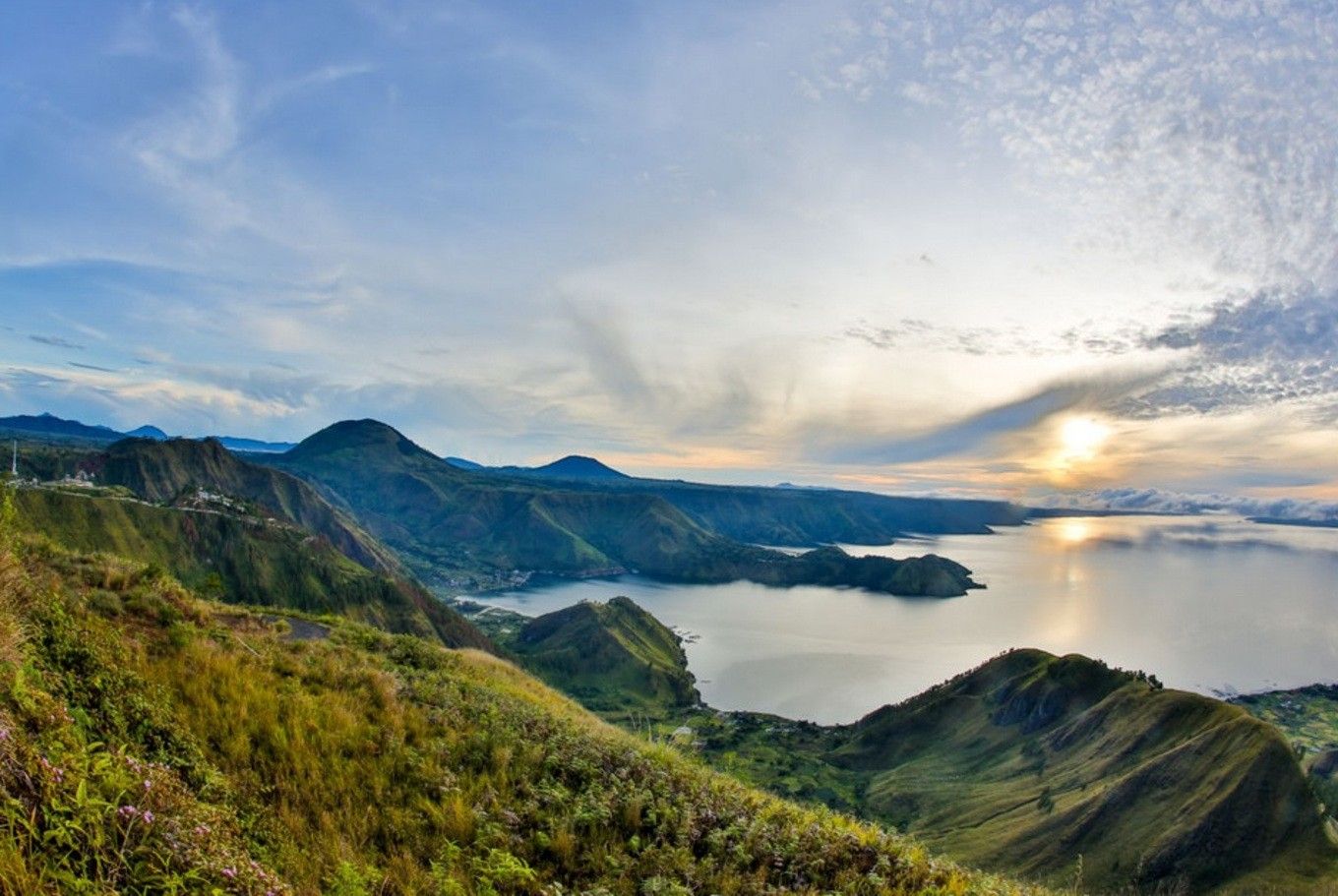 Lake Toba is a crater lake. The crater left by the Toba eruption of about 75.000 years ago. That one blew at least 800 km³ of debris in the air and estimates go as high 3000 km³. All of South-East Asia was covered in a layer of about 15 cm of volcanic ashes, and Toba-ashes have been found in South-Africa, 7.000 km away.

The effect must have been worldwide, as it was in 1815-1816 after Tambora, but then several times worse. It is thought that it caused a 6 year period of cold and  triggered a 1.000 year dip of glaciation in Greenland.

Years after I visited lake Toba, I googled it and found the ‘Toba-hypothesis’. Studies of the human genome show that we, humans, are more closely related to each other than our evolutionary lineage suggests. We appear to have gone through a genetic bottleneck around 70.000 years ago, and after that date modern humans have migrated out of Africa to conquer the world. The dramatic weather change after the Toba volcano eruption may have caused such a bottleneck.

The first time I read about the hypothesis, a sentence struck me. Paraphrasing: “I like to think that early man survived through this extreme hardship by working together, resilient, smart.” This is how the essential mankind was born. Small, resilient tribes and family groups surviving in a world collapsing around them, by using their brains and collaborating.

This idea stuck with me. The collaborating ape, that is who we are, deep down, wired into us. The essence of mankind. High time we start to respect that…

Maybe the essence of the agile movement is that in an unpredictable and volatile world agile software teams are more successful than traditional waterfall practices. That discovery has led to a broader adoption of agility, in teams and tribes (the word ‘tribe’ alone…) instead of hierarchies and departments.

The greatest gift of agile may be exactly that: finding out again that we are happiest, most resilient when working in closely knit teams. Because that is, biologically and evolutionary, who we really are.

The evolution of human collaboration