How all Europeans descend from Belgians
Wolves made it happen!

It made headlines a couple of years ago: all Europeans descend from a population of humans that lived some 37.000 years ago in what is now Belgium. I looked up the original paper (‘The genetic history of Ice Age Europe’, published in Nature, May 2016, with an enormous list of authors). The study team extracted DNA from the oldest remains of Homo sapiens in Europe.

We, as a species arrived in Europe some 45.000 years ago. The genetic evidence presented in this study makes clear however that these first arrivals left no trace in our present-day DNA, so went extinct. The oldest people that transmitted their DNA to us date back to some 37.000 years ago. Two branches really, both found in present day Belgium. The DNA of one branch was also found in Spain, in people that lived there 12.000 years ago, and ultimately in our own gene pool.

Therefore, both branches of our ancestors really lived some 35.000 years ago in Belgium.

The remains were found in Goyet cave. And that made my day. Goyet figured in this blog before. In this cave, back in the 19th century, the skull was found of what was no longer quite a wolf: a proto-dog. The Nature paper does not mention it. But it is hard not to couple the two findings: our European founding population is connected with the oldest dog-like fossil found.

What this tells us about humans and wolves

Brian Hare, in his book ‘Survival of the Friendliest’, paints a picture of how a technologically advanced Homo sapiens swept through Europe, out-competing Homo neanderthalensis by technology and intensive contacts. And drawing wolves to them, to feed on garbage and human feces, self-domesticating and becoming dogs as a side effect.

Except, this cannot be what happened 35.000 years ago. Very few human remains that old are found in Europe anyway, and all but the Goyet population leave no genetic trace. This is not the picture of a successful invasion by dynamic, interconnected people, wiping out the competition (Neanderthal man). These are struggling groups. Not at all successful enough to create garbage dumps the size required to attract wolves and sustain a population on it. The wolves that self-domesticate to consume human waste is a crap theory in more ways than one and cannot explain these very early proto-dogs.

I explained my favorite theory before: early men learned how to hunt together with wolves, as equal partners. The idea is not as weird as it sounds, you may want to watch this excerpt from a BBC documentary. Wolves actively seek friendly contact with a human, even in the 21st century. Wolves are not the savage brutes they have been depicted as. They are highly social animals, living in family packs and sharing all food they capture. They hunt together. They find out how to capture specific kinds of animals and specialize in them, as individual packs, setting up traditions that are passed on to their offspring.

The role of fairness

A recent study “Domestication Does Not Explain the Presence of Inequity Aversion in Dogs” (2017, J. Essler e.a. in Current Biology) shows a highly developed sense of fairness in dogs, and even more in wolves. Watch the hilarious TED-talk by Frans de Waal (https://www.youtube.com/watch?v=meiU6TxysCg&t=8s) on capuchin monkeys to understand how fairness experiments work. They in fact measure the reaction to unfair treatment. The original idea was that dogs have learned fairness from their human partners. In fact, wolves are at least as intolerant of unfairness as dogs, and probably even more.

The innate sense of fairness enables collaboration in the pack. It may also enable wolves to recognize and reward human contribution to a hunt and feel good about it. Wolves are great at chasing prey, bringing them to a stand-still, encircling them. But the final kill of a bison or musk ox is very difficult, dangerous as well, and most of the times wolves try to pry away a calf while avoiding the adults. Humans suck at all parts from detecting prey through chasing and stopping them, but the final kill with spears would be far easier and less risky than anything the wolves can try. Sharing would feel fair to wolves. It would feel fair to the humans as well, if they have this innate sense of fairness too.

The advantage of this theory is that it is based on an essential difference between ourselves, Homo sapiens, and Neanderthal man. These guys were better adapted than we to the climate, had lived successfully through glaciation for 100.000 years or so, had magnificent tools and a brain larger than ours. The theory that Homo sapiens expanded because of better tools, a better network and better clothing sounds better than it is when you look at it more closely. The only tool/weapon we developed, and Neanderthals did not have is the spear thrower, a kind of stick that extends the length of the arm and allows spears to be thrown with higher speed. We probably did not develop it until 30.000 years ago, and even if it was invented and used earlier and proved a really a decisive advantage then why did not Neanderthals copy it?

The ability to collaborate with wolves on the other hand seems to rely on a mutual recognition of a similar social, collaborative lifestyle, not accessible to Neanderthal man. Our partnership with wolves supported our population growth, at the expense of Neanderthals who went extinct.

From wolves to dogs

If we accept the theory that wolves and men actively sought each other out as hunting partners, we get a different perspective on the domestication of dogs. The theory is that man actively domesticated dogs by taking wolf pups and taming them and then use them to hunt with them (different publications by Pat Shipman and Mietje Germonpré).

The obvious question of this theory has always been: why would people do that? Germonpré makes some suggestions, but they are not all that convincing. The collaboration theory does not really help, either. When man collaborates with wolves in hunts, it creates awareness of what wolves can do, but it also removes the main incentive. Why go to the expense of raising a group of young wolves that do not know how to hunt on the off chance that they would be better hunters if tamed? And it comes at a cost. Robbing your friendly wolf neighbor of their pups is hardly likely to improve the relationship. Wolves would know who kidnapped them and would probably come looking for them. And how do you raise wolf pups anyway to become good hunters?

Except, we may have adopted orphaned pups of a friendly wolf pack, where the parents died. In gratitude, maybe because the wolves saved one of our own before. In the hope of continuing the relationship and grow them to be good hunters. Probably in vain, a wild wolf pack is likely to be way more valuable as a hunting partner. But a wolf pup that has become attached to humans may provide other services, protecting the children maybe, alerting the adults to danger, defending some stored meat.

This is what Native Americans did too: they had dogs for a variety of uses, and still hunted with wild wolves.

What does it mean

Instead of wolves self-domesticating to benefit from human success, our theory is quite different. Our collaboration with wolves on an equal footing was the driver of our own success and that of the wolves and dogs that partnered with us.

But is that all there is to it? Maybe not. At home, we trained our cat to scratch its scratching pole when he wants to go out. At least, that is our way of looking at it. The cat can easily believe it the other way round: he has trained us to open the door whenever he scratches the pole, works every time. In fact, his explanation is the simpler one.

What I mean is: instead of wolves adapting to humans, how about humans adapting to wolves? For one, it looks like Neanderthals never managed to set up a partnership with wolves. If we believe the basic idea that Goyet man’s genes survived because of their relationship with wolves and their early dog, the suggestion is that setting up the relationship with wolves may have been a rare event, at least initially. It would stand to reason that only a group of men (including women, of course) that had a developed sense of fairness and openness of mind could do it.

Wolves selected the fair and open people, as shorthand for wolves created an opportunity that could be accessed only by fair- and open-minded people.

Our innate sense of fairness, a cornerstone of collaboration and probably crucial in our becoming Homo sapiens, had only 200.000 years to mature (it probably existed before, but still). Wolves have had maybe millions of years more, and relatively far more generations than man, to hone this sense of fairness and natural talent in collaboration. What if we did not just collaborate, but also learned about sharing and fairness? Native Americans tell wonderful stories of wolves helping men. They certainly sound like they got better and better the more they were told, but the clear message is always that wolves that help people afterwards expect and deserve a reward.

So maybe we need to rethink this the other way round. The humans that managed to collaborate with wolves had to be fair and open-minded in the first place, and had to become fairer, better at sharing, less egoistical to make the collaboration work in the long run. Adopting wolf pups, maybe, very altruistic and a recognition for the special bond and inadvertently hitting on other uses for wolves. Creating ‘man’s best friend’, dogs, in the process. Not quite survival of the friendliest, more ‘survival of the fairest and most open minded’.

There is some evidence, too, about selection. The proportion of Neanderthal genes dropped from over 6 % 37.000 years ago to a bit over 2 %.

It is of course just a hypothesis, this idea of men hunting with wolves becoming the crucial factor in the success and expansion of man. But the idea may not be as farfetched if Native Americans still did it in the 19th century... 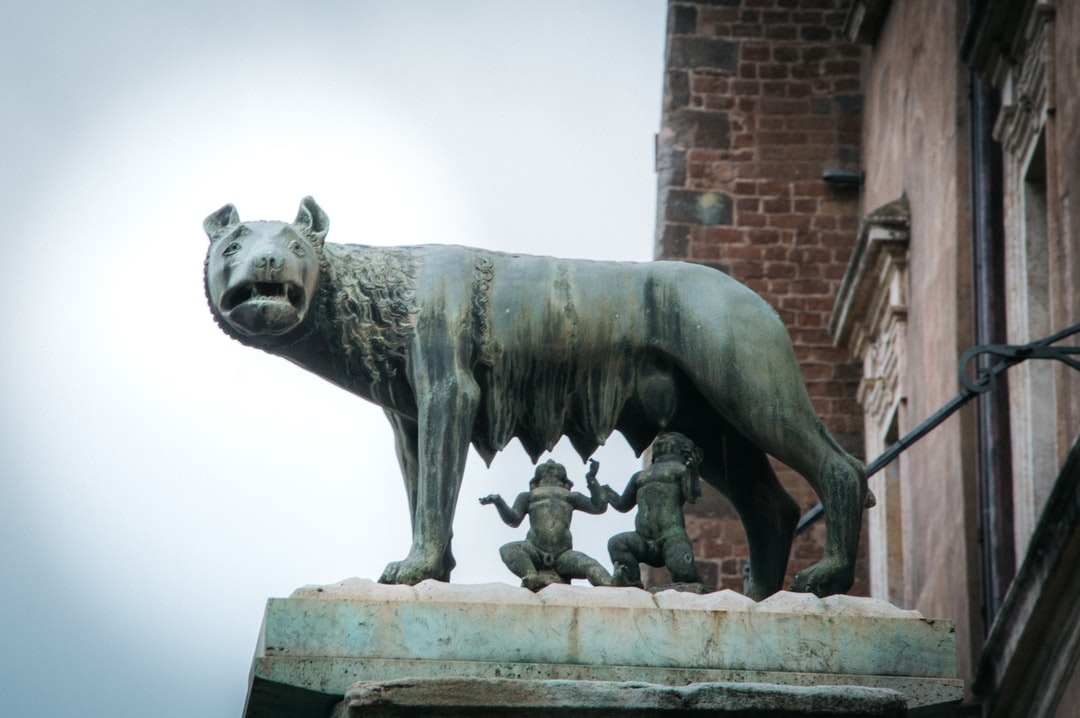 And finally, what to think of this image: the she-wolf suckling the twins Romulus and Remus? What values does she bring to the humans who would found Rome and its civilization? Fairness, caring for each other, sharing equally? It does not work too well for the twins as Romulus kills his brother, but still.
in Biology and agility
# Human evolution collaboration

Collaboration is in our genes, Part 2
How women transformed us into social men